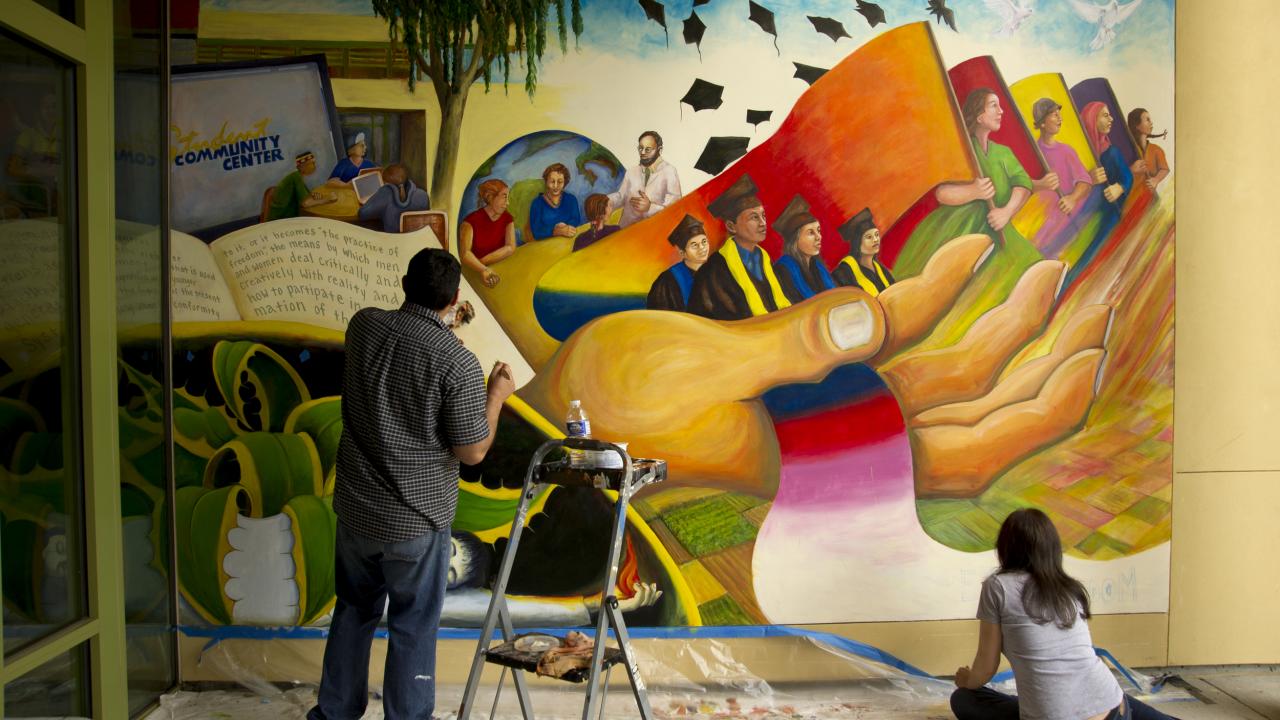 I am delighted to join all of you today for the 2016 UC Davis Fall Convocation. Like its predecessors, this occasion allows us to come together to reflect on what we stand for as an intellectual community, and where we are going as we begin a new academic year.

First, however, I want to begin by remembering Margrit Mondavi, a dear friend of our campus who passed away late last month. Without Margrit and her husband Robert, there would be no Mondavi Center for us to gather in. Given her passionate dedication to the arts and to beauty, it is fitting that we look with fresh eyes and appreciation at this marvelous hall, where faculty, students, staff, and community members from near and far come together to enjoy music, dance, and other performing arts, as well as to ponder the words of lecturers. Thank you, Margrit!

The theme for this year’s Convocation focuses on “dialogue and community” because it seems extraordinarily timely.

This is an election year, when we can expect debates. But I can’t recall a moment in my lifetime when the political discourse of our national community was more starkly polarized, dysfunctional, or lacking in civility. Media, whether online or on-air, seem only to amplify the shrillness of speakers exchanging barbs and frequently ungrounded assertions. And the 24-hour news cycle leaves no one a moment for reflection.

Universities are of the world—of that there is no doubt. But they need not replicate the world in every regard. We all come to a university expecting different things, and we may have different ideas about what would constitute the ideal university.

I have always looked to the university to be a place where all sorts of different ideas were encountered, where members of the university community would discuss them freely and passionately, and where we all had the opportunity to evaluate them and decide which to pursue further, which to leave aside.

Some of the ideas we encounter might be startlingly new, radical departures from received wisdom.

Some might unsettle or alarm us, even offend or provoke.

Sometimes we may simply listen and walk away. Sometimes, whether in class or elsewhere on campus, we may take the opportunity to discuss or debate.

In these contentious times, it is more than ever crucial that we improve our capacity to conduct debates and dialogue, that is, if we want our university to be a true community, and also a true scholarly community––one that fearlessly pursues truth by critically engaging with the broadest range of ideas.

Dialogue, and how it can constitute rather than divide our diverse campus community, is a theme that deserves more than an hour, even if that hour includes, as it does today, extraordinary contributions from many members of our community.

I refer to the voices you have heard and will hear from the videos and Spoken Word performers, from Dean Johnson, and from our keynote speaker, Tani Cantil-Sakauye, Chief Justice of the State of California.

Our thought is that today’s Convocation will be the first of many new opportunities for all members of our community not only to engage in dialogue, but also to learn how each one of us might engage in dialogue more effectively.

The university, free expression, and dialogue I have described my ideal university as a place of robust and unrestricted dialogue. Let me explain how and why, from my perspective, this is such an essential and precious aspect of the university.

Notwithstanding time-manner-place restrictions, the freedom to say what one wishes is constitutionally protected at all public universities and, in California, at private colleges and universities as well. This suggests that California’s lawmakers recognized unhindered expression as somehow essential to every institution of higher education.

Beyond the constitutionally protected right to free speech that students, faculty, and staff all enjoy, American institutions of higher education have for about a century ensured, or sought to ensure, for their faculty something called academic freedom— that is, the right to pursue research, to draw and publish conclusions, and to determine course content based on their own independent judgment.

No administrator and no governmental agency can impose or restrict the content of research, publication, or teaching. And the University of California further established early in this century that students also have certain kinds of academic freedom.

In short, we can happily say that students, staff, and faculty at American universities today enjoy robust freedom when it comes to the expression of ideas, whether in private or public speech, or in the context of educational or research activities.

The American Association of University Professors is a fierce guardian of this right, ready to intervene when the academic freedom of a faculty member is thought to have been abridged. Another guardian is our own division of the UC Academic Senate, which has a committee dedicated to academic freedom.

But what I want to stress is that we must not take this broad freedom of expression for granted; we must not fail to see that it can easily be lost under the wrong conditions.

This is the lesson we learn from observing the often-harsh limits on expression—in extreme cases, resulting in expulsion or arrest—to which many academics and students are subjected around the globe.

It is also the lesson that we learn from examining our own history, for it was not that long ago—only about half a century—that faculty freedom of expression was put under a severe test during the powerful anti-communist movement of the 1940s and 1950s. The loyalty oath required of all employees of California state universities is still with us, vividly reminding us of what happened and what might happen again.

Looking back even further, we find more reasons for us to be vigilant in our protection of free expression. Universities were not always bastions of this right. Anything but.

The precursors of our modern universities came into being in medieval Europe—not as spaces for open teaching and discussion, but rather as institutions subject to the authority of the Catholic Church. Debate was cultivated in the highly formalized dance of pro-and-con argumentation in which the so-called “scholastics” engaged, but only within certain bounds. If some arguments ventured too far from orthodoxy, sooner or later orthodoxy or “right belief” was reasserted. The bishop of Paris, for example, ultimately decided how much Aristotle could be studied at the University of Paris and how that philosopher’s teachings were to be interpreted so as not to contradict Christian faith.

Similarly, the earliest institutions of higher education in our own hemisphere were created to deliver Christian religious instruction and train religious personnel—for example, the University of San Marcos in Lima in 1551, and Harvard College in Massachusetts in 1636.

By this time, however, in both Europe and the Americas the Catholic Church had competition from various forms of reforming or “Protestant” churches, and the early colleges and universities were vigorously sectarian, promoting one particular theological view or another. These sectarian debates were carried out not only in academic circles. Many parts of Europe, for example, were engulfed in decades-long religious wars between 1550 and 1650.

You are probably asking yourself, what does this ancient and rather scholarly history of university conflict have to do with the modern university—and with us today? Quite a bit, as it turns out. Those early scholars ultimately realized that there was only one way out of the endless cycle of irreconcilable debates about matters of faith and doctrine.

Proponents of different sides of the debate saw that they had to agree upon rules of interpretation and engagement if they wanted to get beyond simply shouting past one another as they proclaimed their personal convictions. These rules of engagement ultimately evolved into the scholarly standards by which all of us in the university operate when, for example, in our various disciplines, we judge the worthiness of a new idea or theory. Both our striving for the ideal of full and “objective” truth, and our disposition always to doubt that we have attained it, have their roots in this self- discipline of critical judgment.

Early modern scholars did not merely develop rules of engagement that made dialogue more manageable; they developed a mental posture that made that dialogue more beneficial. In a world of so much certainty—which led hundreds of thousands to slaughter each other on the battlefields of Europe out of deeply held personal faith and conviction—doubt itself became a powerful counter-force. Recognizing the possibility that one’s own beliefs might be incomplete, inadequate, or even mistaken was a decisive step toward both social harmony and deeper understanding.

One can look at the origin of the scientific method as a harnessing of doubt in the pursuit of truth. Those who made doubt the organizing principle of their thinking called themselves “skeptics,” a word we still use today to describe doubters. Following an ancient school of philosophy, the most extreme and principled skeptics subjected all ideas and premises, including their own, to the withering glare of doubt.

In my ideal university, we engage in dialogue in a similar spirit, sincerely entertaining the possibility that we can gain insight from our dialogue partner. We readily accept that our own current grasp of the truth may be incomplete, and that even our deepest convictions may be questionable or based on faulty premises. Keeping our minds open to the possibility of a different interpretation is difficult, but it is a discipline worth developing.

One of its modes that I particularly value is something called “interpretive charity”: when confronted with an idea that seems utterly wrong, we nonetheless try to understand in what ways it might contain some truth, or at least how it might seem to contain truth to others. No need to shout down the speaker of such an idea—indeed, every reason not to. We all gain more if we attempt to engage an idea thoughtfully rather than silence it—and this is especially true in the case of ideas that many of us believe are mistaken or find offensive.

At the same time, it is important to remember that most people—like those early scholars I spoke of—sincerely believe in the ideas they argue, and see themselves on the side of the right and the good. It’s worth learning exactly why they believe what they believe, whether or not we ultimately end up agreeing or disagreeing with them.

A campus community’s shared practice of responding to any idea with respectful and thoughtful engagement can help not only to deepen its collective understanding of important issues, but also to heal divisions, harmonize differences, and promote productive cooperation.

Just as I hope that all of us step into every classroom with an open mind, and pick up every book ready to test the ideas it presents, and test ourselves against those ideas, so I hope we are prepared to listen to and discuss—in a rational, informed, and respectful way—what our fellow community members say, particularly when they say what we find most challenging.

As I have said, the potential for such dialogue is in my view one of the most precious aspects of a university. It is for this reason that I commit myself to preserving UC Davis’s strong tradition of free expression, rigorous pursuit of knowledge and understanding, and mutual respect. I invite you to join me in our collective responsibility to maintain and cherish it.

2019 Spring Commencement: "A Defense of Irresponsibility"

Leading by Example: Strengthening Our Social Equity and Social Outcomes through Diversity