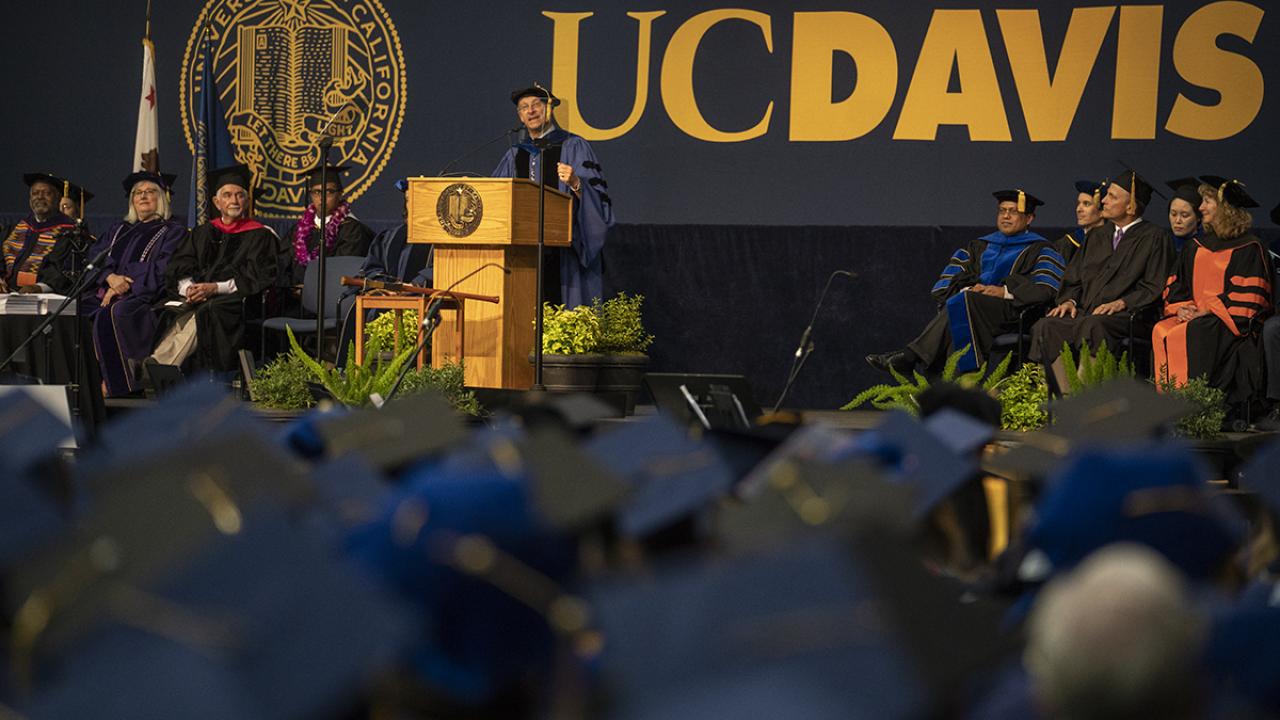 One thing that all would-be commencement speakers have in common is the worry that we will have nothing to say. Not nothing exactly, just nothing that is truly worthy of such an important occasion. I’ve spoken at many commencements during my career, and each time I’ve had to contend with this worry before ending up with something that I thought would do justice to the event. It is difficult to explain why, but sometimes a speaker feels compelled to make a clean break with the past, which in this case means searching for that perfect something to say to the new graduates. This is my explanation as to why, for my address this year, I’ve made a deliberate choice to talk to you about . . . nothing.

To be sure, talking about something seems a wiser course. The very idea of “something” is generally exciting—largely, I think, because we know it’s frequently connected to the good. When a mechanical engineer creates something of great value, her colleagues are likely to exclaim, “I think you’ve really got something!” Astronomers looking for new planets or friendly extraterrestrial life dream of being able to say, “There’s something out there!” And it’s in the hope of enjoying some newly baked chocolate-chip cookies that we rush into the kitchen and say, “Something smells awfully good!”

But something isn’t always a bouquet of roses. When that disposable character in a horror movie gets that terrified look and whispers, “I think I heard something,” it’s usually not a good sign, especially for him. In a different sort of horror story, if your professor returns your exam with a note saying, “There’s something here we need to discuss,” that’s probably not a good sign, either—especially if it’s followed by a suggestion that you bring a box of Kleenex or an emotional support animal.

But the thing about something that is perhaps most relevant to this occasion, today, is that it can also impose a great burden—as, for example, when your parents—only because they want the best for you—encourage you to “make something of your life.” You may be tempted to respond, “Well, I can’t help but make something of my life. I can make a mess of my life. Isn’t a mess something?” But it’s probably never a good idea to engage your parents in a debate on semantics.

Just as something isn’t always good, there is often a lot more to recommend nothing than we might expect. While something is unbounded, and can potentially be anything, nothing can never be other than nothing. This gives nothing great power.

Nothing is, in fact, an immensely useful tool, arguably even more powerful and impressive than something. Consider its effectiveness. It has a wonderful power to end discussions you don’t want to have. All of us can remember times when our parents asked us inappropriate questions like “What did you do today?” or . . . “What are you doing with that beer keg in your bedroom?” Without missing a beat, we answered, “Nothing.” We said it because we knew that word could make unwanted scrutiny disappear in a puff of smoke. And if our parents asked, “What do you mean you’re planning to hitch-hike across South America with the family Schnauzer?” we assured them there was nothing to worry about—not because we really believed there was nothing to worry about, but rather because nothing is a magical charm that can dissolve obstructions.

Unfortunately, nothing’s power is like that of the One Ring in Lord of the Rings: if used inappropriately, it can do great harm. It may seem like I’m about to veer from my topic and actually talk about something, but I assure you I’m not.

Every morning, we leave our houses with a backpack or briefcase filled with personal beliefs, values, attitudes, and preferences concerning the world. These are prized possessions that make us feel good, so we get uncomfortable whenever something makes us question if they’re the best things to be carrying around. Many have insisted that questioning our deeply held beliefs and feelings benefits both ourselves and larger society. Socrates made such an argument, and a multitude of other wise people after him. Unfortunately, nothing—which is a sort of psychological and rhetorical nuclear option—is always close at hand to vaporize any threat to our biases. When any one of our cherished beliefs, values, attitudes, or preferences is challenged, it’s all too tempting to conclude, with barely a thought, that there is nothing of value in this assault. Similarly, if we have had a bad experience with some group of individuals, or have heard bad things about that group, it’s tempting to settle the matter by concluding that there’s nothing good about those people, at least nothing good enough to change our low opinion of them.

Too many of us tend to hold onto the notions we like, and then effectively reduce to nothing anything that would threaten them.

Where this common practice can lead is obvious. If we believe that a certain perspective or ideology has nothing good about it, why give any part of it serious consideration? If a certain group has nothing in the way of relevant knowledge or honorable motives, or can be expected to say nothing that is valuable or not harmful, why listen to that group, or even allow it to speak?

Indeed, why allow ideas or groups that have nothing good about them to be present in our society or at our university? Why allow them even to exist?

Another power of nothing is that it can help us cope with great disappointment—for example, the disappointment we feel when we see nations or factions behave without honor or honesty; when we repeatedly fail to succeed at something or make the world better; or when we are simply overwhelmed by the world’s tragic realities. At these times, we can find some comfort, perhaps even a gratifying sense of sophistication, by believing in nothing at all. The extreme version of this response holds that, no matter what we do, neither people nor society will ever be good, life will never get better, and there is nothing to hope for. I hardly need to point out that these attitudes bring a very curious kind of comfort, one that is inextricable from despair.

Lest you get an unbalanced view, let me now turn to an aspect of nothing that is decidedly more uplifting. Whatever dangers it harbors, nothing can also be the desert soil from which the greatest achievements bloom. We know this from the history of geographical exploration. Before the so-called Age of Discovery, there was nothing to be seen of the Americas on European maps. It was left to explorers like Columbus to turn that nothing into the something of the New World. Regrettably, even as Columbus managed to conquer one sort of nothing, he failed to transcend the idea that the indigenous people he encountered, because different from Europeans, had nothing especially important in the way of civilization or human value. More than 500 years later, we are still wrestling with that tragic legacy.

As this last observation suggests, the greatest achievements that spring from nothing may belong to the realm of thought. I think that you, who as new graduates are well positioned to make a difference in this realm, will appreciate this point especially. The entire historical enterprise of intellectual discovery consists of looking more closely at places where, at first, there seemed to be nothing, or at least nothing very different from what we already saw. I’m thinking of discoveries such as gravity, microbes, subatomic particles, and black holes; the hidden foundations of social institutions, cultural practices, and psychological trauma; and the deeper meaning in a painting by Frida Kahlo or a comedy by Shakespeare. Speaking of Kahlo and Shakespeare, both had to discover something new, a way to turn the “airy nothings” of insight and imagination into impactful art.

I submit that there’s nothing greater than to take a canvas, a sheet of paper, or a blackboard with nothing on it and fill it with an original painting, poem, historical or anthropological account, philosophical or scientific treatise, musical composition, or mathematical equation that advances our understanding of our world or of ourselves. Nor is there anything greater than to recognize, in everyone, especially in those who seem nothing like us, equal worth and dignity. Fortunately, your UC Davis education has given you exceptional preparation to excel in both of these endeavors.

I cannot end this discussion without observing, perhaps to your parents’ dismay, that devoting yourself to nothing, at least for a while, can be a good in itself. I could cite here the Eastern religious notion of nirvana, which is an ideal state of consciousness imagined as an oil lamp whose flame has been blown out. But I think it is sufficient to pose to you the following question:

What do you absolutely need to do, in the next few weeks, that’s more important than lying on the beach; enjoying time with cherished family and friends; exploring the Louvre or the Amazon rainforest; or pursuing some other much-desired reward?

I hope your answer to this question is: nothing. For occasionally doing nothing, or at least nothing obligatory, is a necessity of a fulfilled and healthy life.

Looking forward, let me say that I hope you all become even more expert than you are now on nothing and its many aspects; that you see the benefits as well as the harms in nothing; that you learn the proper use of nothing; that, as appropriate, you energetically aspire to do nothing; and finally, that you are as excited as I am by the wondrous possibilities of nothing. You and the world will be better off for your many-faceted commitment to nothing.

What is more, I will construe it in the most positive way if, in the next few days, you tell others that my address today briefly touched on something, but mostly it was about nothing.

Congratulations to the Class of 2018 for the many impressive somethings that you’ve already accomplished and for the many more of them in your future. All are part of your journey to someplace good, wherever that may be.

Thank you very much.

A Message to the Campus Community on Operational Status