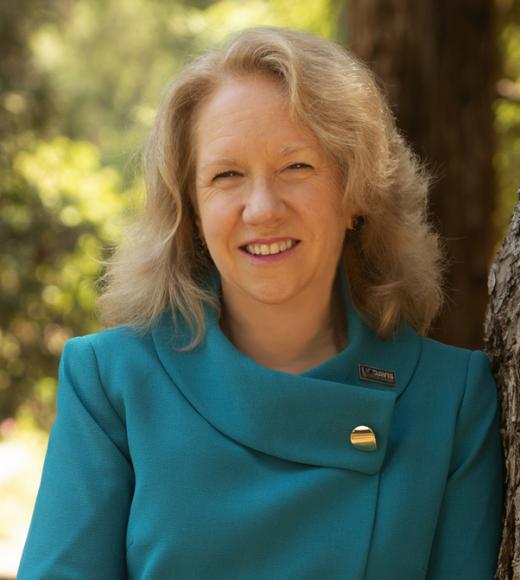 Mary S. Croughan became the provost and executive vice chancellor of the University of California, Davis on July 1, 2020.

Croughan is an experienced administrator in higher education and a distinguished professor and researcher in family medicine, OB/GYN, and epidemiology who has served more than 30 years at the University of California—first at the UCSF School of Medicine and then at the UC Office of the President—and three years at the University of Nevada, Las Vegas.

As UC Davis’ chief academic officer and executive vice chancellor, she partners with the chancellor, vice chancellors, deans, and faculty to advance the university’s mission of excellence in education, research, and public service. Her responsibilities, which are aligned with the UC Davis Strategic Plan, include:

Leadership experience in the UC system

In her earlier experience at the University of California, Croughan served as executive director of the Research Grants Program Office at the UC Office of the President from 2010 to 2017. There she oversaw seven grant programs to develop and implement UC’s intramural research strategic vision, and also oversaw research funds for the state of California.

From 1987 to 2017, she served as a faculty member at UC San Francisco in the School of Medicine. During her time with UCSF, she co-directed a required course in epidemiology and biostatistics for several years, and won multiple teaching awards, including the Academic Senate’s Distinguished Teaching Award.

Also at UCSF, Croughan developed and led a practice-based research network with more than 600 community-based primary care physicians. Since 1987, she has conducted research in reproductive and perinatal epidemiology, specifically examining health outcomes of nearly 52,000 women treated for infertility, and of their partners and their children.

She served also as a Fellow of the American Council on Education with University of Miami President Donna Shalala in 2012-13. In this role, she studied higher education within the United States and internationally, enhancing her expertise in undergraduate education, fundraising, athletics, and crisis communications.

A background in promoting research

Immediately prior to becoming UC Davis provost, Croughan served at the University of Nevada, Las Vegas as vice president for research and economic development, and as professor in its School of Public Health, from 2017 through 2019. During her time as vice president, she helped build UNLV’s research infrastructure, fostered interdisciplinary research, ensured that more undergraduates had research opportunities, and identified strategic research areas where the university could grow.

She was instrumental in helping UNLV gain status as an R1 institution in 2018, seven years ahead of schedule. Croughan also helped develop and open the UNLV Harry Reid Research and Technology Park, including Black Fire Innovation, which is designed to promote collaborative research between the university and industry partners in the hospitality and gaming industry.

Croughan is a proud Aggie. Her youngest daughter is currently a UC Davis senior, and several other family members also are Aggies. She received her Bachelor of Science degree in community health from UC Davis before going on to earn her doctorate in epidemiology from The Johns Hopkins University School of Hygiene and Public Health.

“UC Davis was the birthplace of my career and my introduction to the incredible opportunities afforded to students at a public research university,” Croughan has said. “It is an honor to help lead this extraordinary university through the current challenges facing our world and higher education, and also help ensure that UC Davis remains one of the world’s greatest public research universities.”

Checking In With Chancellor May: Reject Violence. Reject Hate.

Checking In With Chancellor May: Home Sweet Homecoming